Possible reasons of popularity of the Damien Hirst’s diamond skulls

Possible reasons of popularity of the Damien Hirst’s diamond skulls 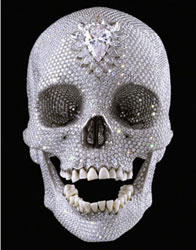 In this essay will be explored key aspects that possibly could explain the people’s admiration for the sculpture called For the Love of God made by English artist, entrepreneur, and art collector Damien Hirst. Mainly essay will deal with those aspects of the popularity that concern personal choice of the artist, such as the shape and materials to create an art work.

First of all this essay will include as complete as possible description of this work and the idea put behind it. Than there will be a short demonstrative comparison between For the Love Of God sculpture and the other Hirst’s work that have very close features to the main object of discussion and called For Heaven’s Sake.

Finally all contained information and analysis will lead to logical output, from which could be seen probable reasons of Damien Hirst’s creation popularity.

“Since the late 1980’s, Hirst has used a varied practise of installation, sculpture, painting and drawing to explore the complex relationship between art, life and death” (Hirst Biography, 2012). Explaining: “Art’s about life and it can’t really be about anything else… there isn’t anything else”, Hirst’s work investigates and challenges contemporary belief systems, and dissects the tensions and uncertainties at the heart of human experience. (Hirst, 2005: 20 –21). “In 2007, he unveiled the spectacular, For the Love of God (2007): a platinum cast of a skull set with 8,601 flawless pavé-set diamonds, at the White Cube exhibition ‘Beyond Belief’. The following year, he took the unprecedented step of bypassing gallery involvement in selling 244 new works at Sotheby’s auction house in London” (Hirst and Burn, 2001: 37; Hirst and Gray, in Milner, 2006: 32).

For the Love of God will be a key figure discussed in this essay. The short and capacious description of the sculpture was given by specialists from Tate Museum: “For the Love of God is a life-size platinum cast of an eighteenth century human skull, covered by 8,601 flawless diamonds, inset with the original skull’s teeth. At the front of the cranium is a 52.4 carat pink diamond. Since it was first exhibited in 2007, For the Love of God has become one of the most widely recognised works of contemporary art. It represents the artist’s continued interest in mortality and notions of value” (Tate Press Releases, 2012).

On this passage possible to judge the big cost of the work, because it is made from expensive materials and moreover the tiny jewelry work has been done. In a research by White, 2009, the author regard to the question of the cost of this work, and notes that the price exceeds £50 million. From this research it could seem that For The Love Of God so incredibly popular because of it’s price, and it is not unreasonable, in fact the opportunity to sale expensive artwork extends the target audience and takes it beyond the usual circle of connoisseurs of art.

As known, in particular it was observed during critical and contextual studies lectures in 2014, often wealthy people have a habit of buying expensive works of art in order to emphasize their richness. This practice today is similar to the custom of the Renaissance, when the rich representatives of high society commissioned portrait which were necessarily depict the trappings of wealth, like for example on a painting by Paolo Veronese Portrait of a Man.

Also Johnson-Perkins noticed that nowadays, with the advent of various technologies, such as cameras, computers etc., portraits are not so relevant, but the need to demonstrate the viability remained and now it is manifested through the obtaining of the so-called "status" things: cars, consumer electronics, real estate, art works. In this case producing of expensive art piece makes it possible to get a lot more viewers, including the target audience of potential buyers are not among in the number of people who know a lot about art. But it is too early to make a final conclusion.

The real value an artwork gains at the expense of the ideas embedded in it. Damien Hirst said about his work in an interview to Tate Etc. magazine: “Every work that has ever interested me is about death. All art – even a child’s scrawl – is about making sense of the world we live in, and this world has darkness at the end of it. I was taught when I was young to confront things that you can’t avoid, and death is a very difficult thing to confront. You can come up with quirky comments, such as ‘no one gets out of here alive’, or ‘at the end of the day, it’s not the end of the world’, and they become clichés – everything associated with death becomes meaningless. There is a great quote by Samuel Beckett where he says: ‘Death has not required us to keep a day free. That sums up the whole problem with it. But if you think about it, it becomes really stupid. It seems to be swept under the carpet in our society, which is really unhealthy’.” (Tate Articles, 2012).

“The work For the Love of God stands in the great tradition of the ‘Memento Mori’, where an image or an object serves to remind us of our mortality” (Sterling, 2011). Dutch art historian Rudi Fuchs, writing about the work in 2007, observed: ‘The skull is out of this world, celestial almost. It proclaims victory over decay. At the same time it represents death as something infinitely more relentless. Compared to the tearful sadness of a vanitas scene, the diamond skull is glory itself’” (Hirst, Fuchs and Beard, 2007: 7). The idea of this sculpture is built on the constant fear of all mankind, the fear of death. It makes the concept of diamond skull understandable for every viewer. This fact suggests that the intended audience is expanding so much that concerns not only the rich spectators, who aims to confirm their wealth by buying status things, and art lovers, but all educated world as a whole. This conclusion follows from quoted book by Hirst, Fuchs and Beard.

To prove that the price is the crucial aspect contained popularity of diamond skull, it could be compared with another work of this artist, called For Heaven’s Sake. “For Heaven’s Sake is a life-size platinum cast of an infant human skull pavé-set with brilliant-cut pink and fine white diamonds. The cast is set with 8,128 perfect diamonds: 7,105 of which are natural fancy pink, while the fontanel contains 1,023 white diamonds. It was unveiled in 2010 at Gagosian Gallery Hong Kong’s inaugural exhibition, ‘Forgotten Promises’.

The skull from which the cast was taken was acquired by Hirst whilst he was working on the first diamond skull, For the Love of God (2007). It is that of an infant estimated to be between 40 and 42 weeks of age and was purchased as part of a rare collection of 19th century human skulls and skeletons from Leiden that originated from the Delft pathology collection” (Hirst Artworks: Diamond Skulls, n.d.). For the Heaven’s sake is not as popular as the other diamond skull, it can be verified after learning about the number of exhibitions where each work has been presented. The first skull was exposed five times on the exhibitions, including White Cube, Hoxton Square and Mason’s Yard, London, United Kingdom and Tate Modern, London, United Kingdom but For the Heaven’s sake was exhibited only twice (Hirst Artworks: Diamond Skulls, n.d.). The differences between these two works are not so significant to For Heaven’s Sake lost its importance, but it is likely a problem not only in size (For Heaven’s Sake smaller than For the Love of God), but at a price. There is one else detail, except that fact that impossible to make similar works and to be popular only with the help of familiar views, it is semiotic meaning of skull.

“The skull belongs to the category of the gloomiest and threatening character. In the visual arts skull serves as the main attribute of personalized shapes” (Vovk, 2006). It means that the form of the sculpture, in this case the form of skull is very important. For Heaven’s Sake sculpture is smaller than main discussed work because the original form is a skull of an infant, as was said before in a description stage. According to the cultural context and traditions of European society, people are not psychologically ready to accept the death of a child, and so it is one of the reasons that the image of a small skull is much less popular than the sculpture depicting a skull usual size.

There is a question arise: if imagine that the same incredibly expensive materials are used in the manufacture of no skull, but the sculpture has a completely different form, whether it is as popular as discussing work? Usually very difficult to find a subject of Fine Arts made of the same expensive materials like For the Love of God. However, similar materials are often used for the production of luxury goods and status items such as figurines, home furnishings, jewelry, important detail that traditionally these items in the forms of execution is quite far from the shape of the skull, usually it is pictures of animals, birds or people and mythical creatures. Such things are not objects of art, and are not exhibited in galleries, their purpose to be sold, so the characters used for their production are mostly bright and positive (e.g. Bruliki.ru Stonecutsculptures, n.d.). It means that not only materials play an important role in popularity of For the Love of God, but the semiotic meaning.

To sum up all the information it can be seen that the most important aspects that contains popularity are aimed to extension of intended audience and in a work by Damien Hirst everything was done for it. Using of expensive materials helps the work to be sold and attracts potential buyers that which may not even belong to the world of art lovers. Creating sculptures understandable form, which makes a simple associative reference to the issue, is so general that it applies to everyone, it attracts a lot of attention from the general public. These items relate to the author’s decision and as seen from analysis, have a huge influence on viewers.
Verba volant, scripta manent.
P.S. Если вы заметили у меня ошибку, обязательно сообщите.